Dark Web Users – Who Are They? And what do they use the dark web for? Users of the dark web all have reasons to conceal their identity, whether it’s law-enforcement officials or journalists who use the dark web to communicate with sources, or criminals who take advantage of the obscurity to engage in illegal activities. “It has dual purposes,” said one insider. “In liberal democratic countries like most countries in the West, it tends to conceal criminal activity, but in highly repressive regimes around the world, it could be for citizens and activists.” “If you have data you want to exploit, you go on the dark web to find the talented people who know how to exploit it, you’ve made it available in their environment, ” said another insider. “The information on the dark web is for people who know how to dig and forage and use it, for good or bad.” Observers of the Dark Web believe it is important for the public to gain a better understanding of the contents of the dark web in order for there to be a proper debate about its nature, dangers – and potential benefits. Misunderstanding about the dark net is rife, and has been fuelled by often misleading media coverage. This, in turn, has influenced policy debates based on incorrect assumptions and hyperbole. Research has revealed that the dark web is much smaller than commonly thought. It also reveals that much of the dark web’s content is entirely legitimate, with only half of it containing content likely to be illegal under U.K. and U.S. law 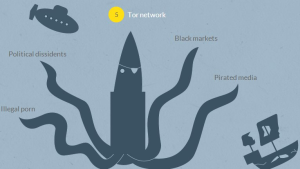 The first ever comprehensive report on the ‘dark web’ has been published just a short while ago by Intelliagg. This UK company monitors, collects and aggregates intelligence about organisations and individuals that could pose a threat to their clients. Although partial efforts to map the dark web have been attempted before, Intelliagg and Darksum (it’s US counterpart) are the first to employ hard data to paint a comprehensive picture of its contents. The report accurately maps the dark web and offers valuable insights into the poorly understood realm of cyberspace.

Intelliagg found that, despite its reputation, only 48% of the sites on the dark web are illegal. Drugs featured 4% of the time, whereas weapons and pornography-fetish come up at less than 2% collectively. Leaked data (28%) and financial fraud (12%). Perhaps not surprisingly, the vast majority of information is in English (76%). German and Chinese are next at 4% and 3.7% respectively. You may safely download the Intelliagg and Darksum Dark Web Report by clicking the link. Intelliagg in UK and Darksum of USA will continue to monitor the evolution of the dark net regularly, and this report represents the first of a series to identify trends and developments.