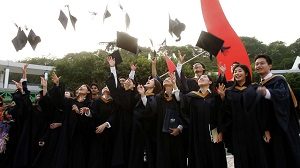 Top 25 Asian Universities for Employability Today. What’s do you think is the best university name in Asia to put on your job application? Well, this question has been questioned out to Asian employers who were asked where they recruit their most competent, innovative and effective graduates. Asian Students Today are Competing for every Job. One Asian Human Resources Manager has said that universities which have big global research reputations are not necessarily “those that do most to nurture student employability”. And the cost of tuition fees and a competitive jobs market meant that Asian students were increasingly concerned about the likelihood that their prospective university will help them thrive afterwards. The rankings also take into account employment statistics for former students, where high-flying graduates in Asian top jobs studied and the range of partnerships between universities and employers.

Top 25 Asian Universities for Employability in 2018-2019. 1. Tsinghua University, Beijing (China) Since its establishment in 1911, it has graduated numerous Chinese leaders in politics, business, academia, and culture. 2. The University of Hong Kong (H.K.). Founded in 1911, its origins can be traced back to the Hong Kong College of Medicine for Chinese which was founded in 1887. 3. The University of Tokyo (Japan) abbreviated as Todai or UTokyo. Established in 1877 as the first imperial university, it is one of Japan’s most prestigious universities. 4. Peking University (China). Founded as the Imperial University of Peking in 1898 as a successor and replacement of Guozijian, it is the first modern national university established in China. 5. Seoul National University (South Korea). Founded in 1946, Seoul National University is considered to be the most prestigious university in the country.

6. Fudan University, Shanghai (China). One of the most prestigious and selective universities in China. It is a Chinese Ministry of Education Class A Double First Class University. 7. Waseda University, Shinjuku, Tokyo (Japan). Waseda consistently ranks among the most academically selective and prestigious universities in Japanese university rankings. 8. National Institute of Singapore (NUS) (Singapore). Founded in 1905 as a medical college, it is the oldest institute of higher learning (IHL) in Singapore, as well as the largest university in the country. 9. Zhejiang University, Hangzhou (China). Founded in 1897, Zhejiang University is one of China’s oldest, most selective and most prestigious institutions of higher education in the country. 10. Shanghai Jiao Tong University (China). Established in 1896 as Nanyang Public School by an imperial edict issued by the Guangxu Emperor, it has been referred to as “The MIT of the East” since the 1930s.

11. Keio University, Minato, Tokyo (Japan). It is known as the oldest institute of modern higher education in Japan. Founder Fukuzawa Yukichi originally established it as a school for Western studies in 1858 in Edo. 12. Kyoto University (Japan). It is the second oldest Japanese university, one of Asia’s highest ranked universities and one of Japan’s National Seven Universities. 13. Tokyo Institute of Technology (Japan). Tokyo Tech is the largest institution for higher education in Japan dedicated to science and technology and is generally considered to be one of the most prestigious universities in Japan. 14. Osaka University (Japan). It is the sixth oldest university in Japan as the Osaka Prefectural Medical College. Numerous prominent scientists have worked at Osaka University such as the Nobel Laureate in Physics Hideki Yukawa. 15. KAIST. (South Korea) The Korea Advanced Institute of Science and Technology was established in 1971 as the first research oriented science and engineering institution. KAIST also has been internationally accredited in business education.

16. Sungkyunkwan University (SKKU), Seoul (South Korea). The institution traces its origins to the historical Sungkyunkwan founded in 1398 by the Joseon Dynasty. It was restructured into a university in the late nineteenth century and has since greatly expanded its course offerings and reputation. 17. National Taiwan University (NTU), Taipei (Taiwan). It is the most prestigious comprehensive university in Taiwan. It consists of 11 colleges, four research centers and a school of professional education and continuing studies. 18. Yonsei University, Seoul (South Korea). It is one of Korea’s three top universities, considered the most prestigious in the country. Yonsei was established in 1885 and is one of the oldest universities in South Korea. 19. Nagoya University (Japan). It is the 3rd highest ranked higher education institution in Japan. Six Nobel Prize winners have been associated with Nagoya University, the third most in Japan. 20. Wuhan University, Hubei (China). The university is at Luojia Hill, with palatial buildings blending Chinese and Western styles. It was commonly regarded as one of the most beautiful campuses and a top 10 university for decades in China.

21. Huazhong University of Science and Technology HUST, Wuhan (China). As a national key university, It is directly affiliated to the Ministry of Education of China. HUST manages Wuhan National Laboratories for Optoelectronics (WNLO) at Wuchang, which is one of the five national laboratories in China. 22. The City University of Hong Kong (H.K.). It was founded in 1984 as City Polytechnic of Hong Kong and became a fully accredited university in 1994. It is one of eight government-funded degree-granting tertiary institutions. 23. Hanyang University, Seoul (South Korea). One of the leading private research universities in South Korea, especially in the field of engineering. The university was established as an engineering institute (DongA Engineering Institute) in 1939. 24. Hokkaido University, Sapporo (Japan). (Hokudai for short) was founded in 1876 as Sapporo Agricultural College. It is a member of the Imperial Universities. 25. Tongji University, Shanghai (China). Especially renowned for its engineering, business, and architecture programs; its civil engineering department has consistently ranked first in China for decades.