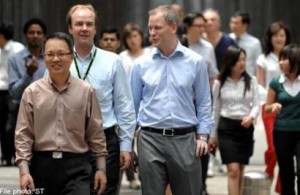 Asian Expat Jobs and Careers. In Western countries, there is a saying that ‘the grass is always greener on the other side.” This is why many business professionals are so brave to try to find their luck and fortune in other countries. A lot of these people come to Asia. Either looking for a corporate job or as entrepreneurs.  Many Western expats are searching for a new and stable income during the present worldwide problematic job situation. For top leadership roles and asset managers, the talent pool in Asia isn’t deep enough, and it is especially not deep enough for female leaders. They need strong local leaders with international skill sets. It’s about the diversity of gender, diversity of ethnicity, and ultimately diversity of thinking. China is in surveys often ranked number one expat job destination. Its expanding industry attracted many multinationals over the recent years, and a growing economy continued to create many new job opportunities.  However, lots of people arrived on the back of large MNCs (multinational corporations), only 10 years later to find their China jobs localized as returning Chinese with excellent management skills, as well as Mandarin, English and other language capabilities begin taking their place. Many expats in China today have a major problem – generally their Mandarin-speaking skills are not very high. That was earlier not much of a problem in larger cities such as Beijing and Shanghai with huge foreign populations and local Chinese used to service them with English-language skills. Yet these two cities are among the most competitive – and expensive – in China, and success today is harder to come by. China Job Situation. But don’t fear entirely. The number of expat workers in China has increased by 18% over the past 5 years. Beijing, Hong Kong, and Shanghai continue to dominate as expat worker hot-spots, however, other Chinese cities are currently seeing the number of foreign nationals rise. Of all expats working in the country, 85% are employed by international firms and in lesser-known Chengdu, it is a similar story. As the capital of Sichuan province in south-west China, it is home to global finance, technology and automotive giants such as Microsoft, Volkswagen, and JP Morgan all bringing international employees into the region. Asia is facing a leadership crisis. There are concrete steps – internal and external – that companies can take to ensure their talent pipelines can withstand the emerging market pressures. Corporations that recognize the increasing importance of Asia to their businesses have decided to relocate senior global roles to the region. Industrial firms that have invested heavily in Asia, including Caterpillar, GE, and Schneider Electric, are among those companies taking this step.