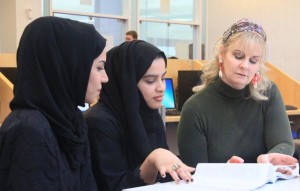 Jobs and Careers in the Middle East. The most popular expat destinations in the Middle East are probably Saudi Arabia followed by U.A.E., the United Arab Emirates, where both Dubai and Abu Dhabi belong. Next comes Kuwait, Qatar, Oman, and Bahrain. The demand for expat workers in these nations is across the board – from the workforce on the ground to senior management. The Expat Women is Overlooked. Some recruiters note that opportunities for women expats lag those of their male counterparts. The number of women in the workforce is much lower even if they have the same or better skills and experience as their male counterparts applying for a post. This is disappointing because they can do the job just as well but do not get the same chances. Governments in the Gulf States are working to try to address this problem and open the workforce to more women. Quality of Life Does Not Satisfy, Despite Good Healthcare in the Gulf Region The GCC states’ rankings in the Quality of Life Index are, for the most part, among the worst in the world: Qatar, Saudi Arabia, and Kuwait rank 55th, 63rd, and 65th out of 67 countries, with only the UAE and Oman standing out on place 23 and 32, respectively. Expats are generally dissatisfied with the leisure options available in the region: Only the UAE does better than the worldwide average, with 38% of expats expressing complete satisfaction with local leisure options. In comparison, only five% of respondents in Saudi Arabia say the same. Moreover, expats are not satisfied with the difficulty of getting around in the GCC countries. Many feel that public transportation is not up to global standards. Political Stability under Threat The lack of political stability in the Middle East is a major problem at the moment, and the Gulf States are also affected, according to the survey respondents. In fact, fewer expats in Bahrain, Kuwait, and Saudi Arabia are satisfied with the political stability in their country of residence than the global average of 61%.

Jobs and Careers in Dubai, UAE Expat Jobs in Dubai. Dubai is also a very popular top destination for professional expats. The demand for professionals is so great in Dubai that most jobs go to expat from outside the nation. The main talent being employed in Dubai comes from countries like  India, Britain, Pakistan, the USA, and Saudi Arabia. Professionals with skills and experience in the following fields are especially sought after Management and Leadership, Engineering and Sales, Accounting and Lifestyles. Despite the flood of new professionals moving to Dubai and UAE, the demand for talent keeps growing. Dubai economy looks to continue a healthy grows after winning the Expo 2020 vote. The Government has promised to invest billions into infrastructure in the two main cities in U.A.E, Abu Dhabi, the capital and Dubai. The Dubai Expo will create thousands of jobs at all levels. The crucial posts are those at the senior level who will manage the project. Employers are looking across the world for the best expats to fill the posts.